Our story began more than 100 years ago in the small western frontier town of Bend, Oregon.

Our Story continues today in a globalized world.

Founded by Mr. and Mrs. Alexander Drake, Bend began as a small village of 21 adults and 11 children. (Bend history) Mrs. Drake had been a member of the Presbyterian church in New England and through her influence, the early citizens who were interested in a Presbyterian organization, were drawn together. November 1900 the first sermon heard in the Bend area is preached by Presbyterian Sunday School Missionary from Prineville, OR, Rev. B.F. Harper.

January 1902 Rev. Harper organized a non-denominational Sunday School of Presbyterian, Methodist and Baptist children. It met in a little log cabin located in downtown Bend Drake Park. In 1903, First Presbyterian, the first church to be organized in the area, was founded while continuing to participate in the joint Sunday School venture until beginning our own program in 1912. 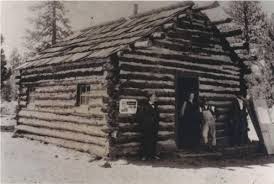 1902—Little log cabin in Drake Park, the location of the first non-denominational Sunday School of Presbyterian, Methodist and Baptist children.

1910 the Drakes moved to California and sold their interests in Bend to The Bend Company, owned by Clyde McKay who is listed as one of the leaders in the organization of First Presbyterian. The McKays (Clyde, Olive and sons Duncan and Gordon) moved to Bend in 1911. The McKays’ company, The Bend Company, was very active in the life of Bend and donated land at the corner of Franklin Avenue and Harriman Street, on the edge of what is now, downtown Bend, for First Presbyterian’s first church building. This building is known as the Old Stone Church and in true Bend fashion, is now a bike shop.

Jump ahead to summer of 1955 and the session (our leadership group) passes a motion to recommend to the congregation that a new location be found for the church. The congregation had outgrown their beloved church building even after purchasing a house next door to accommodate the nursery. Site committee chairman Clarence Bush found a 7.8 acre tract of land that one described as out in “deer country.” Regardless, the site committee recommended the property, it was put up for bid, fundraising commenced and the property was purchased for $2850. Jim Sowder represented Session as the bidder and despite competiting with a developer who nearly doubled the original price, the country agreed to take the $1440 Sowder had in his pocket as down payment and the remaining balance was made in quarterly payments.

January 24, 1960 groundbreaking for the new church building took place and by January 1962 the building was dedicated.

21 years later an addition to the church building was completed. Then in 1996 with First Presbyterian approaching its 100 year anniversary a long-range committee that had formed several years prior began to study our congregational needs and took a hard look at Bend’s demographics and projected population increase. The committee’s job was to determine whether or not we needed to consider expanding our facility again and if so, to recommend at what point we should take that step. When it reached the point that we could no longer expand our program offerings because every room in the church was booked solid at all times, we opted to build again. April 1999 this new addition is dedicated.

This history you read here is merely a snapshot. There are many people and their stories that have driven the missions of this church over the years. To learn more, when in Bend visit our Church Library and wander through our history books. You’ll find the history of First Presbyterian and some interesting history of Central Oregon as well.