Posted: Sun, Aug 15, 2021
Aug 15th, Cultivate Joy with Rev. Dr. Steven Koski Jesus says, “May my joy be in you and may your joy be full”. You know, could it be that God’s desire for us is to know and and experience joy? We Presbyterian’s a nickname, the frozen chosen. You know, we may be the frozen chosen, [...] 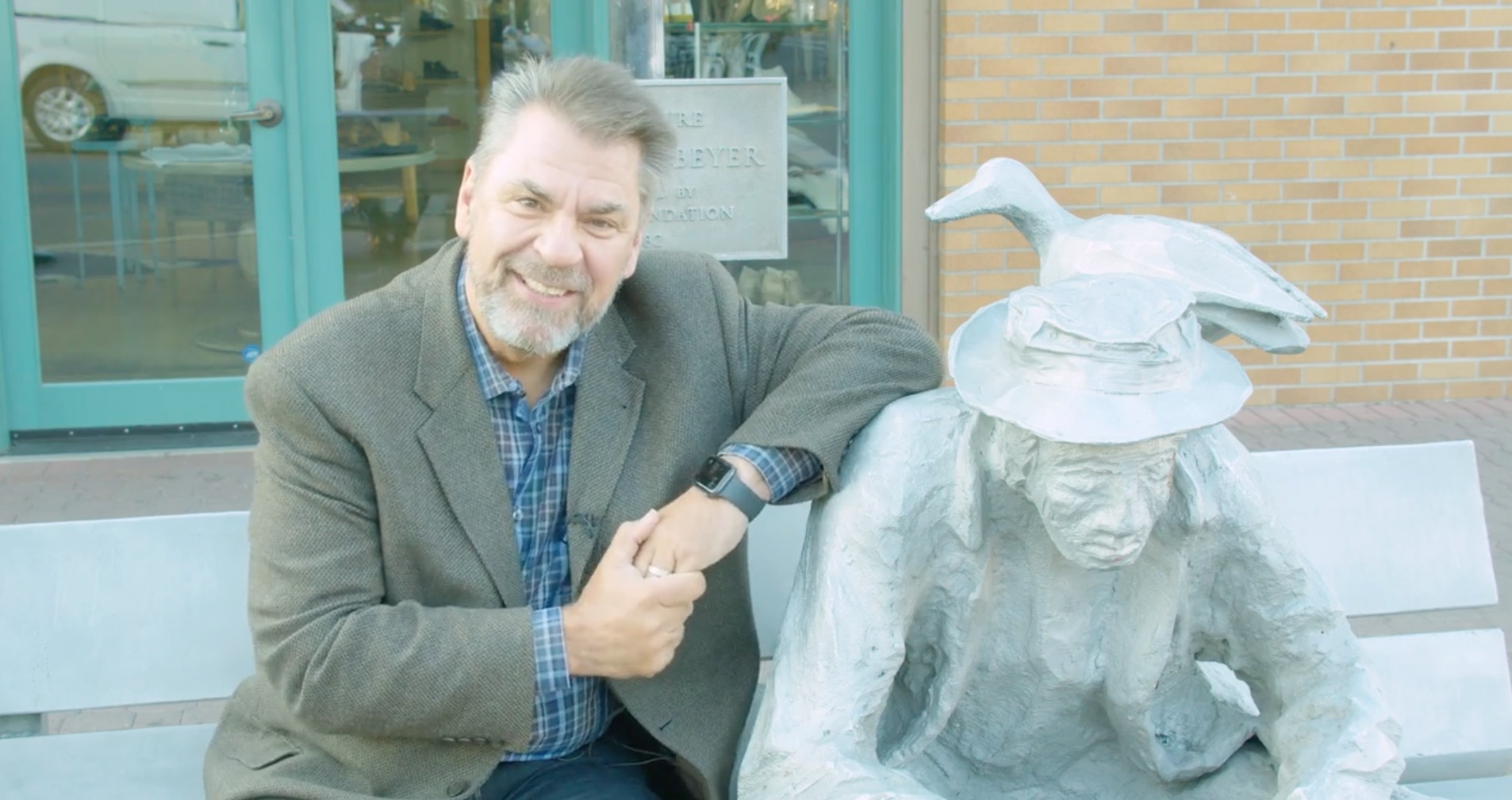 Jesus says, “May my joy be in you and may your joy be full”. You know, could it be that God’s desire for us is to know and and experience joy? We Presbyterian’s a nickname, the frozen chosen. You know, we may be the frozen chosen, but could it be that God wants to defrost our hearts so that we might know? Joy Frederick Buechner wrote, “God created us enjoy and God created us for joy. And in the long run, not all the darkness there is in the world and in ourselves can separate us from that joy”.

The heart of the Christian experience is not intended to be guilt, remorse, shame. It’s intended to be joy. During August, we’re taking a close look at Paul’s letter to the church at Phillipi, what scholars call a letter of joy. You know, which is amazing because Paul writes this letter to the church he founded ten years earlier from a prison cell in Rome as he awaits the outcome of his trial. Not not sure if he’ll be set free or or executed.

And in this letter, Paul describes his own joy and encourages the church community at Phillipi to choose joy.

So today we’re looking at Philippians Chapter three and to understand what what Paul’s saying in chapter three, you know, we actually need to understand what it was like to be a Christian, what it was like to be part of the the early Christian community in that time period. Now, scholars suggest the letter was written around 62 A.D. The crucifixion of Jesus happened probably in the year 29 A.D.

And what we need to know to really understand Paul’s letter is that Christianity and Judaism are not yet totally distinct, especially in the east where Phillipi is located. It’s still before the year 70 A.D. when the temple in Jerusalem was was destroyed by the Roman emperor Titus. So the main focus for worship for the Jews was was always in Jerusalem, in the temple. It involved blood sacrifice on festival days. That’s what worship mainly was all about. Synagogues that existed in towns and villages were not at all like you and I understand synagogues to be today.

Synagogue life and Judaism really developed after the temple was destroyed in 70 A.D.. So at the point Paul wrote this letter, you know, synagogues were really like like satellite campuses of the main temple in Jerusalem, you know, campuses where people would would gather to to hear the Torah read. But mostly they would wait until festival days to go to Jerusalem and have real worship in the temple.

But some synagogues changed from teaching the Messiah was still yet to come, to synagogues who proclaimed Jesus the rabbi as the messiah who had already come. And you could really see this tension in the letters Paul wrote. Paul is addressing conflicts as people are actually trying to figure out what they believe. Now church councils and an official creeds declaring an orthodox faith. You know, that wouldn’t happen for a couple of hundred more years. So when Paul wrote his letter, there actually wasn’t a clear, consistent understanding of who Jesus was.

And if Jesus was the Messiah, what does that mean? There was a group of Jewish Christians within early Christianity, you know, that can best be described as as a legalists who took the Bible literally. Now, remember, the only Bible, Paul, in the early Christians had was the Hebrew Bible, what we refer to as as the Old Testament. Now, these legalists would insist that that all of the Greek and Roman converts that that Paul led to faith in Christ.

They needed to obey all 613 laws in the Old Testament in order to please God, including being circumcised. Imagine if I said, all right, guys, you’re going to have to have a very unpleasant surgery. If you want to join this church, you know, don’t worry. It’s going to hurt for a few days. But, you know, you’ll get over it. Not much joy there, but it’s the law. It’s what the Bible says and the legalist believe that you need to do what the Bible says to please God.

Now to you, that that might sound really extreme, but how many today still think there are requirements to follow in order to please God? That you have to believe the right things. You have to belong to the right church. You have to do the right things to prove your worth, to earn God’s love. Now, Paul was one of the first theologians of the church. And what Paul came to understand and Jesus is that God could care less about circumcision or whether you ate shellfish.

What God desires is for people to know how wide and long and high and deep is the love of Christ and to experience God’s acceptance. Paul really struggled with the legalists in the early Christian community. Paul would preach the gospel, he would preach the good news of the Gospel and Phillipi or Galatia or Corinth. And after he’d leave, the legalists would swoop in and say, you know, Paul’s a good guy, but his theology is a little off. It’s wrong.

This infuriated Paul, Paul begins chapter three saying, watch out for those dogs, those evil doers, those false teachers, those who mutilate the flesh, you know, and then Paul goes on reciting his resume. He says, I was circumcised on the eighth day.

I am of the tribe of Benjamin, a Hebrew of Hebrews. In regards to the law. I was a Pharisee. As for zeal, I persecuted Christians. As for righteousness based on the law, I was faultless. Now, what Paul is saying is that when it comes to legalism, when it comes to following the rules, I’ve been there, I’ve done that, he said. I grew up to be a Pharisee, the ones who are most serious about purity and obeying the law.

My resume, he says, if anyone deserves to earn God’s favor, you know, it would be me. And I think Paul’s saying I tried I tried really hard to get God to accept me, I did all the right things, I did all the right things to gain that acceptance, that approval from God. And it wasn’t enough. So I tried harder. Maybe you felt that way, you know, many of us grew up with a religion fueled by by guilt and shame being being told how horrible or inadequate we are and that God is angry with us.

You know, many of us grew up with parents who didn’t know how to love unconditionally, who withheld their love until you earned their approval. I remember when I was when I was 12 years old and I was sharing my report card, six A’s, one B, I was sharing my report card with my parents. And I heard, why aren’t they all A’s? We know you’re capable, capable of doing better. You know, if you just tried a little harder…

You know, I know they thought they were encouraging my best. But what stuck? Was that my best was not enough to earn their approval to to earn my own approval. I needed to try harder. Forty five years later, I if I’m honest, I still struggle associating, being perfect with being lovable. And if we’re striving to win the approval of our parents, our spouse, our peers, our boss, ourselves. We tend to project that onto God, assuming God’s love is conditional and that God will withhold God’s love until we’ve earned it.

What if our spiritual journey isn’t trying to prove that we are worthy of God’s love? What if the spiritual journey is unlearning everything that has tried to convince us otherwise? That’s what Paul is trying to say to the church at Phillipi. You know, they’re being told that that they have to obey all the rules to please God. Paul is saying, no, no, no. You don’t have to do anything to earn God’s love. It’s given it’s a gift. God has come to us in Jesus to show us that we are loved unconditionally.

Paul goes on in Chapter three and says, the very credentials these people are waving around is something special. I’m tearing up and throwing out with the trash along with everything else I used to take credit for. Why? Because of Christ. All the things I once thought were so important are insignificant compared compared to knowing the love of Christ firsthand. Paul says, I didn’t want some petty, inferior brand of righteousness that comes from trying to follow a list of rules when I could get a robust relationship with God that comes from trusting Christ’s love.

You know, Jesus, Jesus hung around with really broken people, those who were considered sinners, they excluded the unclean, the the imperfect, he hung around with those who who were rejected and pushed to the margins. And Jesus didn’t say, you know, go clean yourself up, get your act together, make sure you’re acceptable enough before you come to my table and experience my love. No, Jesus said to them and says to us… Welcome.

There’s a place for you here, you are accepted just as you are, the amazing radical theology that Paul is introducing to the church at Phillipi and frankly to us today is that the love of God revealed to us in Jesus is a love that wants nothing more than for us to accept that we are accepted. That’s the key to finding joy, the deep conviction that God has already seen the worst of us. And that God still loves us, accepts us.

Imagine what would happen if if we accepted people as they are and not as we think they should be, what would happen if we tried our best to be the presence of unconditional love in the world, if our primary goal was to make sure people felt seen, valued, important… accepted. To let people know that their lives matter to God, and to us.

The joy of living each day, as if what we do matters, comes from a deep inner conviction. That we do matter, we matter to God, we are accepted. You know, whatever whatever else is true about you, you are welcome in God’s presence. You matter to God, not someday when you can earn it or prove you’re worthy of it. But right now, just as you are, you are accepted. Friends may you know the joy, the joy that comes from accepting. That we are accepted. And may you extend that same Amazing Grace to others.