March 7th, Again and Again: We are Shown the Way with Rev. Dr. Steven Koski

Posted: Sun, Mar 7, 2021
Bethlehem Inn got its start over 20 years ago when a group of churches, including First Presbyterian, worked together to provide shelter for the homeless. Through the compassion, the empathy of our community, this amazing new facility was built. 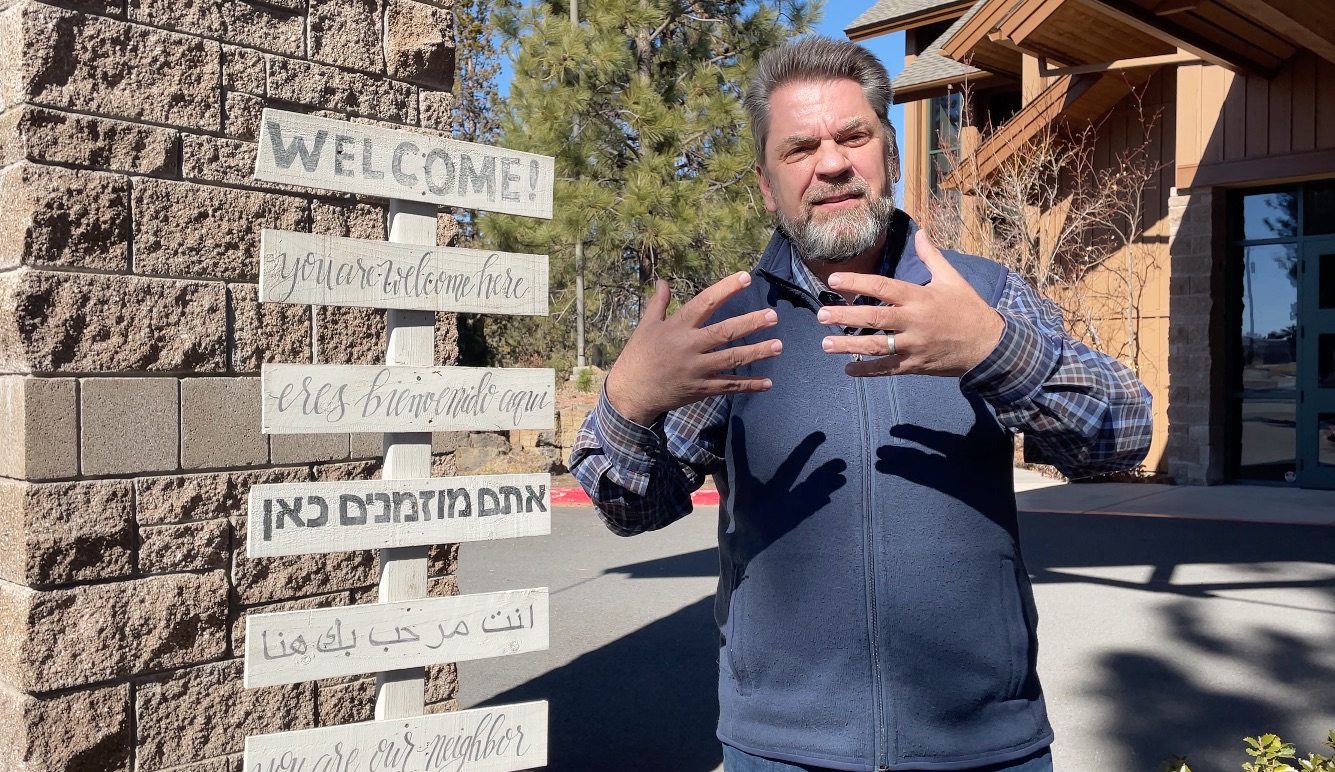 Here I am at Bethlehem Inn, Bethlehem Inn is the largest homeless shelter in Bend able to serve one hundred and forty people a night. I’m extremely honored to serve on the board of directors of Bethlehem Inn. Bethlehem and actually got its start over 20 years ago when a group of churches, including First Presbyterian, worked together to provide shelter for the homeless. I mean, folks used to sleep on the floor of Heritage Hall at our old sanctuary, and then through the compassion, the empathy of our community, this amazing new facility was built.

Ryan Dowd is the executive director of the largest homeless shelter in the Chicago area. He’s also developed an empathy driven homeless training program. Our staff and all of our leadership that the elders serving in session and our deacons right now are participating in this online training program. Ryan Dowd believes that everyone deserves to be treated with dignity, that no one should have to prove that they deserve a warm and a safe place to sleep at night, that we are only as good as we care for the most vulnerable among us, and that empathy is the answer.

Forty two percent are there for two weeks to a year. They certainly don’t choose to be homeless and eight percent are there for over a year. And they are what is commonly called the chronic homeless. And now many people judge those they see as chronically homeless as, well, they’re the ones that choose to be homeless. Except more often than not, they’re living with a mental illness. Someone, for example, who is struggling with schizophrenia does not make a choice.

And often there is this shame because many actually would love to make different choices, but they are trapped in the cycle of poverty and can’t find a way out. So the answer to the question, well, what do we do about the people who choose to be homeless? That answer is simple. Nothing. Because people rarely, if ever, choose to be homeless. Well the answer to the question, what do we do about the homeless, that answer is actually pretty simple as well.

We love them and the best expression of love is empathy, empathy is always the answer. In our faith, if Christianity is to make any sense at all, it’s not how strong we can recite the line of a creed. It’s how we care and treat the most vulnerable among us. It’s whether or not we we have heart space to include and feel the pain of others and respond with mercy and tenderness rather than judgment. Jesus said, love one another. As I have loved you again and again and again, Jesus has shown us the way, the way of love, and it’s the way of empathy. So, what is empathy and how is it different from sympathy? Now, empathy is to feel is to feel with someone. It requires vulnerability and it often leads to connection. Sympathy is to feel sorry for someone. And can be done at a safe distance. There are three qualities of empathy.

The first quality is perspective taking. That is when we’re willing to actually step into the situation of another. That’s when we’re willing to try to see the world through the eyes of another, for example, rather than thinking and assuming we know everything there is to know about what it means to be homeless, it’s Billy being willing to actually try to step inside the shoes of someone who is homeless, try to see the world through their eyes. Without judgment.

And the second quality of empathy. Is to shift from judgment to curiosity. You know, I was I was driving on the Bend Parkway yesterday, and there was a car in the other lane kind of racing up to me fast and raced by me and aggressively cut right in front of me. I had to break. What do I do? Do I then pull out and try to move alongside and shake my fist or worse, or do I practice empathy through curiosity? You know, maybe that person has been out of work for a year and they’re running late for a really important interview, maybe they really struggled to get the kids ready for school in the morning and they’re running late to a doctor’s appointment.

Maybe life is just so hard and so, so painful right now that there’s no nowhere for them to express that pain, so it gets expressed in aggressive driving. Or maybe they’re just a jerk, I don’t know. And that’s the whole point. We don’t know. I mean, every single person we meet is fighting some battle, is carrying some burden, is experiencing some loss, has some wound that remains unhealed. So maybe when people are a jerk, maybe it’s just an outward expression of pain that just remains unhealed. So empathy always is being willing to let go of judgment and to be curious, to be really curious about the lives and the stories that people are living.

And the third quality of empathy is being willing to feel what people are feeling, for their pain to become your pain. It says in Hebrews 13:3, remember those who were mistreated, as if you yourself are mistreated and be willing to feel their pain. I mean, we’re not called to feel sorry for those who are in need. We’re actually called to feel with those who are in need for their pain to become our pain. I mean, I think of empathy as this sacred space. So imagine someone someone falls in a deep hole and they’re in this deep, dark hole and they yell out, “Help help, I’m stuck, I’m scared, it’s dark, I’m overwhelmed!” And you hear the cries, actually, you feel the pain of the cries, you stop. You see them.

You say, “Hold on, I’m coming down.” And you’re willing actually to crawl down into the hole, into the darkness, to sit beside them. And you say, “Wow, I know what it’s like to be in dark holes like this, what’s going on?” And you say, “You know, it’s also OK, you don’t have to say anything. I’m not going anywhere. I’m with you. You’re not alone.” That’s empathy.

Sympathy is someone who falls in a dark hole and you go, “Wow, bummer, how’d you end up down there? That’s that’s a really, really deep hole. I feel really bad for you, but you know at least it’s not a deeper hole than it is. Need a sandwich? Good luck!” Sympathy is when you feel sorry for someone, and with sympathy it’s actually easy to stay at a distance. Empathy is risking the vulnerability of feeling deeply with someone. Their pain becomes your pain. Again, and again, and again Jesus showed us the way, the way of love. And it is the way of empathy.

In Mark 1 Verses 40:42, it says a man with leprosy approached Jesus, fell to his knees, begged, “If you were willing, you can make me clean.” It says Jesus was moved with compassion, reached out, touched the man and said, “I am willing, be clean.” It says the leprosy immediately left the man and he was cleansed. Well, the story says the man had leprosy.

In that culture leprosy was a Hebrew word used to describe any kind of rash or skin disorder. In fact, actual leprosy didn’t appear in Palestine until many years later. If he had any kind of rash or skin disorder, you were required to go to the priest. And the priest would would look it over and declare you unclean, and then you would be banished from the community. You would have to allow your hair to grow and fall down. You would have to wear torn clothes so that people could see you coming.

You would be required by law to put your your hand over your mouth. And if anyone came near you, you’d yell out: “Unclean, Unclean”, you would be forced to live on the outskirts of town. Now, think of that with the debate going on in our own community right now, the whole not in my backyard. And they would be forced in this time to live in a cave or or a tomb, and then you would not be touched ever by another human being.

And somehow your symptoms disappeared. And then you would have to go back to the priest who would have to declare you clean. And then, and only then, you’d be restored to community. So be curious, be curious and try to step into the shoes, try to imagine what it looked like through the eyes of the man in the story. Be curious, feel his pain. You’re an outcast, you are judged by society as as unacceptable through no fault of your own, no choice of your own.

And he asked, and notice, he doesn’t ask to be cured from leprosy, he asked to be made clean. What he desperately needs and wants is to be restored to relationship, to be restored to his family, to be restored to community. What he’s desperate for is for someone to see him, to feel his pain, to recognize his dignity. And notice what Jesus does, the man says: “If you were willing, you can make me clean,” and the story says, Jesus was moved with compassion, empathy, and he reaches out his hand and touches the man, which was forbidden by law.

Jesus broke the law. Jesus. He himself became unclean. He took within himself the man’s condition, the man’s loneliness, the man’s pain. And then the story says Jesus did something that that only a priest can do. Jesus declared the man clean. He first said, you were clean. Even though you have leprosy, you are clean. What a revolutionary act of love. Not just then, but now. Jesus declared someone for whom society has deemed unclean, unworthy, unacceptable, Jesus declared clean.

Jesus restored, restored to relationship, to connection, to love someone the religious institutions rejected and excluded. Someone society deemed unworthy. Jesus welcomed this man, this lonely, this man in such deep anguish. Jesus welcomed him into the Kingdom of God, where everyone is welcome, where no one is a stranger, where everyone belongs. It’s a spacious place. It’s a spacious place for those who are on the outside are brought into the inside.

For those who are living on the margins are brought into the center where they can be accepted, included, restored, made whole. It’s a place that doesn’t give someone their dignity, but helps them recognize the dignity that has always been theirs. That’s what the touch of Jesus meant, the touch of empathy and Jesus says.

Go and do likewise. Father Greg Boyle says, you know, we don’t we don’t go to the margins to make a difference so that we can be some kind of hero. We are called to the margins to be with and love those on the margins so that we will be different. People don’t choose their pain and suffering. And even what often looks like a choice isn’t really a choice. But we always we always have a chance to choose love, to choose empathy. And when we choose love, when we choose empathy, we just might find that we are the ones who are being saved. May it be so.