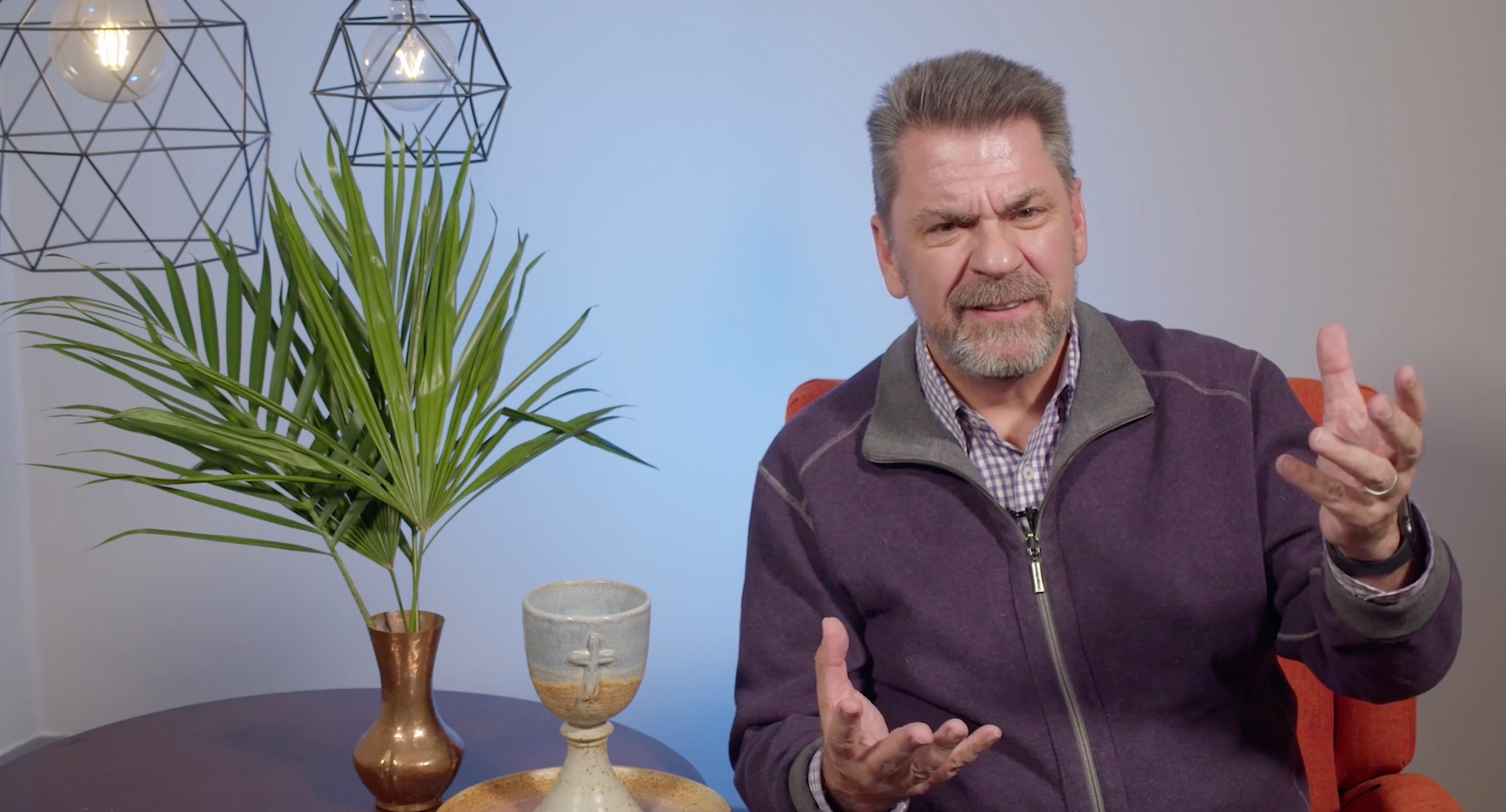 Skipping that part about walking through the shadows in between. You know, it’s tempting to want to go from the big parade on Palm Sunday to the empty tomb, skipping the stuff that makes us uncomfortable. Stuff like Jesus eating his last meal with the people he loved most, all of whom, perhaps like me, would betray, abandon or deny him. We might want to skip the part where Jesus washes the tired, sore, dirty feet of his disciples because then we wouldn’t have to hear Him say, we are to love one another with the same kind of humility and vulnerability. We want to skip the part where the friends of Jesus, perhaps like me, couldn’t even stay awake while he prayed in the garden.

We want to skip the part where the crowd, perhaps like me, would quickly change from shouting Hosanna to crucify him because he didn’t live up to their expectations.

We don’t want to hear someone shout, perhaps like me, for God’s sake, save yourself. Because I suspect we would save ourselves. We can’t bear to witness Jesus looking into the eyes of the one who nailed the nails into his hands, saying, Father, forgive, because we might then be challenged to give up those resentments that we cling to. We want to skip the part where Jesus cries out, I thirst. And why have you forsaken me?

Because we just might hear the cries of those in our world who are hungry and thirsty and those who feel forsaken so it’s understandable. It’s understandable to look for a detour that will take us straight from glory to glory, bypassing the shadows of Holy Week.

But transformation happens when we don’t take the shortcut. But we’re willing to walk with Jesus through the shadows. It’s in the shadows that we just might encounter the fierceness of a love that will save us from ourselves.

I wanted a red Schwinn Roadrunner bicycle for more than anything for my 8th birthday. My parents worked hard. We certainly weren’t deprived of any essentials, but we didn’t have more than the basics. My parents graciously worked hard to celebrate my birthday with cake and friends, games, gifts. I mean, what else could an eight year old want or expect?

Well, let me tell you what I expected. A bright red Schwinn road runner bicycle. I quickly unwrapped the presence a basketball chemistry set, a new shirt, the requisite pair of socks because underwear came at Christmas. I tossed it all aside, assuming I would now be led outside where the gift I expected would be waiting for me.

What do you mean, no more presents? Where’s my new bike?

I was hopping mad. I didn’t have a tantrum because, believe me, I didn’t dare. But there wasn’t a hint of gratitude. All I could think about was how let down and disappointed I felt. I was the center of the universe, and everyone and everything revolved around me.

I wasn’t aware or focused on my parents and really all the sacrifices they had to make to give me a wonderful birthday party. Nope. I expected a red Schwinn Roadrunner bicycle, and I didn’t get it. And that wasn’t fair. I stayed mad for months.

What I needed was a Copernicus moment. Do you remember Copernicus?

This change in perspective is credited as one of the great scientific achievements of all time.

It is only when we take ourselves out of the center that God has any chance to inhabit that space.

We are about life. We are not here to be blessed, but to be a blessing. Copernicus moments remove us from the center, which is good news, because even though we desperately try, we can’t save ourselves.

Palm Sunday, Palm Sunday and the journey through the shadows of Holy Week are one big Copernicus moment, the writer Adam Mount wrote. I don’t have the right personality, she said. For Holy Week, I want to skip the suffering and go straight to the resurrection. In fact, I’d like to skip ahead to the version of one of our kids in our Sunday school who drew a picture of the Easter Bunny outside the tomb. Yeah, everlasting life and a basket full of chocolate.

That’s what I’m talking about, she said. That version doesn’t ask anything of me, doesn’t push me out of my comfort zones. It allows me to stay right where I am, as the center of the universe, or at least the center of my universe.

Jesus confronts us with a Copernicus moment on that first Palm Sunday, inviting a reorientation from the love of power to the power.

There were two parades. There were two parades that first Palm Sunday that entered Jerusalem from opposite sides of the city. It was the beginning of the Passover. The city was crowded. So from the west came the usual Imperial parade of Pontius Pilate because it was common for those in power to parade into Jerusalem for the high holidays to put their power and might on full display, putting an end to any ideas, any ideas of a peasant revolt.

So picture Pontius Pilate entering on a white horse, surrounded by military with swords, displaying the love of power, grounded in fear, protecting the status quo.

Now on the other side of the city comes a very different parade. The Gospel of Matthew says Jesus is traveling with his disciples toward Jerusalem when he stops and gives very specific directions to two disciples. He says, Go to the village ahead of you. You will find a donkey tied there with her colt by her side. Untie them and bring them both to me.

So Jesus doesn’t ride a stallion, as people might expect or want him to be.

Jesus rides the most unmilitary Mount Imaginable, a nursing mother donkey with her baby colt beside her. Jesus didn’t want any confusion about the Copernicus moment he was bringing when he arrived into Jerusalem. He didn’t come into Jerusalem as a conquering hero on a white horse, as most expected, but he came humbly and vulnerably on a nursing donkey with her colt by her side. The crowd cried out Hosanna, which literally means save us. Now they expected a mighty King who would save them from the Roman Empire.

Instead, they received a savior who loved so fiercely and fully he was willing to lay down his very life for them. And that’s not what anyone expected.

If we’re willing to follow Jesus through the shadows this Holy Week, we just might have a Copernicus moment encountering a divine love no one expects but everyone needs.

We’re usually reminded during Holy Week a theology of the Cross that suggests the cross is somehow about us and about what God has done to atone for our sins. Now the version I was taught as a kid was that I was so bad that God had to send his only son to suffer and die a horrible death to pay for the fact that I was so bad. And the hope is that I would feel bad enough about all of that, that I would then try much, much harder to be good.

Now there are a number of variations on this theme, but in every variation, it’s about us.

How did we ever peace ourselves? At the center of the story?

Now what if the cross isn’t about us, but about God?

What if it’s not about us but about God, about God revealing the depth and power of a love we can never fully understand? What if the hope of Jesus is a Copernicus moment where we would reorient our lives, removing ourselves from the center and inviting the fierceness of that love as our center?

Now that would change everything.

If you want to see God’s heart laid bare for all to see, walk through the shadows with Jesus this Holy Week. Witness the One in the posture of a servant, holding the tired, sore, smelly feet of his friends, tenderly washing them, witnessed the one betrayed, denied, spit at crucified, looking into the eyes of those who drove the nails into his hands, saying, Father, forgive.

No one expected that kind of unfathomable, unimaginable love. I’m not sure we even expect it today in this world, that lusts for power.

Do we really trust the power of that kind of vulnerable love?

Walk with Jesus through the shadows this Holy Week and hear the heart of God crying out from the cross, the cry all of us know intimately at some point in our lives. Why have you forsaken me when we place ourselves at the center, when we think the cross is about us? From this vantage point, our view is an angry, vengeful God demanding a pound of flesh to atone for our sins. The view is of a God standing in heaven with folded arms, looking down at the cross, judging us and punishing Jesus.

We need a Copernicus moment.

What if the cross isn’t about us, but about who God is?

And what if God isn’t standing above the cross, looking down?

I don’t think the suffering and death of Jesus is about you, but I believe with my whole heart that it is certainly for you and reveals a God who suffers with you. In fact, God is so for you that there is no peace. God will not go to to be with you.

It is walking with Jesus through the shadows to the cross that we know God isn’t standing smugly at a distance but willing to enter the grave in the very stench of death to say, Even here, even here, I will not be without you.

Honestly, I don’t understand this, but then again, it’s not about me.

It’s about a selfempting God who pursues us and saves us with a relentless and fierce love.

So I hope today and maybe sometime this Holy Week, as you walk with Jesus through the shadows, you will have a Copernicus moment where you might realize it’s not about you.

The paradox is that’s what will save us.

Because when we take ourselves out of the center, it is then the fierce love of God revealed in Jesus has a chance to inhabit that space. And when that fierce love inhabits that space in the center of us, everything changes.

We find the hope and the courage necessary to bring that love into the shadows of the world where it is needed. Needed the most.