May 2, Rhythms of Blessing with Rev. Dr. Steven Koski

Posted: Sun, May 2, 2021
May 2, Rhythms of Blessing with Rev. Dr. Steven Koski Here I am sitting in our newly renovated nursery at the church that is now our brand new play center, you know, this beautiful space will continue to be a safe and nurturing environment for the very youngest in our church community. This space will [...] 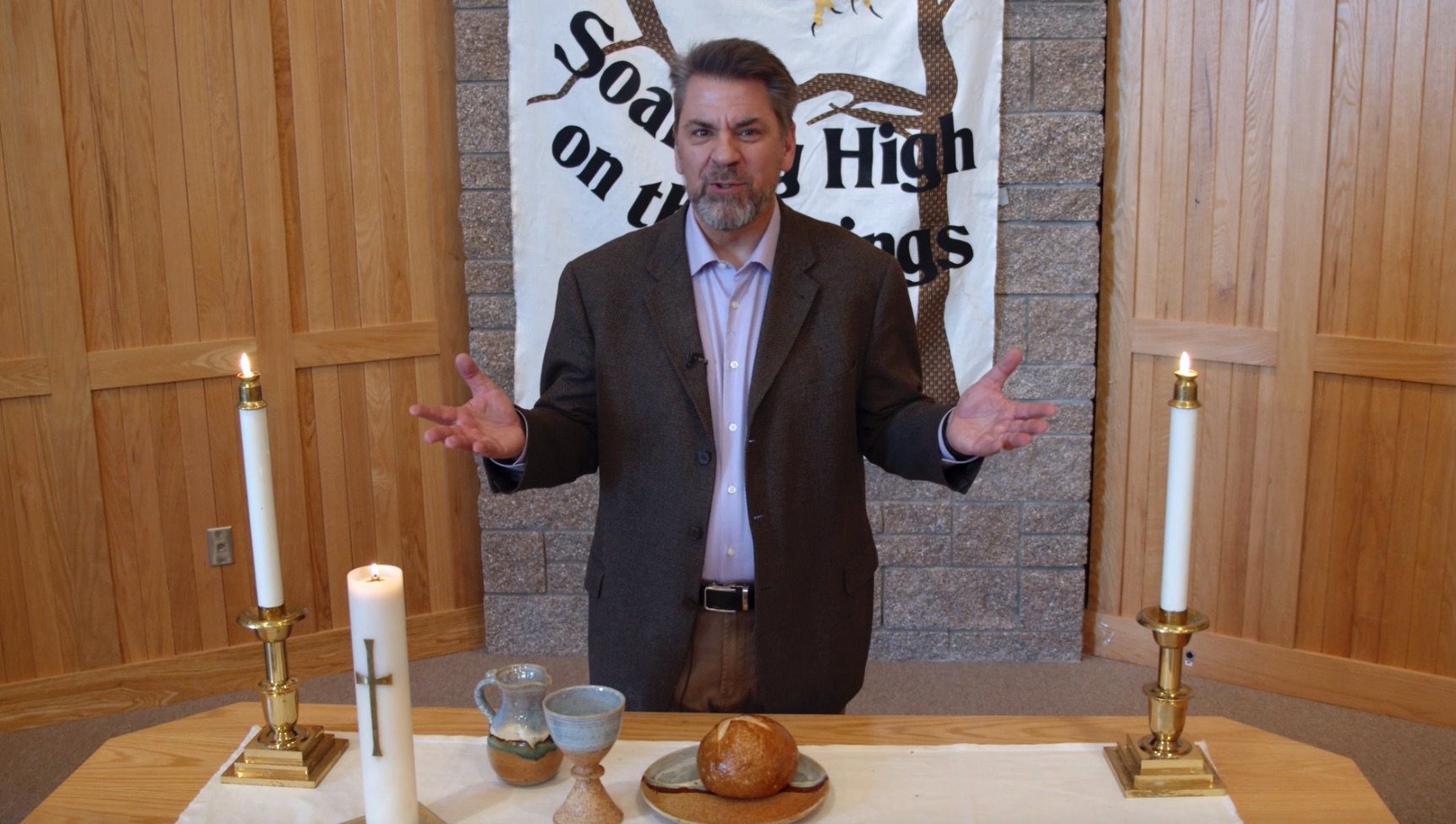 May 2, Rhythms of Blessing with Rev. Dr. Steven Koski

Here I am sitting in our newly renovated nursery at the church that is now our brand new play center, you know, this beautiful space will continue to be a safe and nurturing environment for the very youngest in our church community.

As the saying goes, it takes a village to raise a child privilege works to ensure that all central Oregon families, you know, across income, race, language, orientation and identity and background that all have the opportunity and the support they need to thrive. You know, the vision of privilege is for families to support one another in creating an environment.

Where children can thrive and develop a sense of belonging and where families find support, just simply being part of a community. Mr. Rogers once said, we live in a world in which we need to share responsibility. You know, it’s so easy to say, not my child, not my community, not my world, not my problem.

And he says, then there are those who see the need and respond. He said, I consider those people my heroes. Do you remember the story I’ve told before, the photojournalist covering the war in Sarajevo who is taking pictures of the devastation of the war, when you heard a sniper’s rifle, he turned to see a child fall to the ground. A man began to scream, My child, my child’s been shot. Help the photographer, help the man and the child into the backseat of the car.

They they raced to the hospital. The man cried out from the backseat.

My my child, my child. She’s bleeding so badly. Hurry. They arrived in the child was taken into the emergency room and into surgery, and hours later the doctor appeared with that look on his face that said, we did everything we could. But it was too late. The man turned to the photographer and said. Can you help me find this child’s father so that we can tell him the photographer was confused? Father, I thought you were her father.

And my initial response, my initial response was to change the channel. To turn the channel to SportsCenter, I mean, it it just it just was all too much. And then I thought, what if they were my children? What if people change the channel? Ignoring the suffering. Of my children, and the fact of the matter is there is no such thing as other people’s children. They are all our children. You know, I think of the 20 children, 20.

Six and seven year olds killed at Sandy Hook Elementary School nine years ago. Would we have a greater sense of urgency to do whatever is necessary to reduce gun violence if those 20 children were our children? I called a black friend of mine who lives in Chicago this past week. You know, just. Just to check in with all that’s going on right now. He has three boys under the age of 15. I could just I could hear it in his voice, but he said, you know, I’m just numb.

Honestly, I’m losing hope. Nothing changes. Nothing ever changes. It just gets worse. And he said, it feels like my children are constantly in danger and no one seems to care. No one seems to be willing to change things.

And I couldn’t help but wonder if I would feel a greater sense of urgency to do whatever I can to dismantle systemic racism and white supremacy if I saw my friend’s children, his boys.

As my own children. Dietrich Bonhoeffer said the ultimate test of a moral and just society is the kind of world it creates for its children. They’re all our children.

Imagine the healing that might be possible if that became our lands, living for ourselves simply leads to growing old living for the sake of our children and our children’s future.

I mean, not just a privileged few, but all children helps us become elders.

And the world right now is in desperate need of the wisdom and sacrifice of elders, elders willing to be a hero for a child, especially the most vulnerable children in our Bible reading today from the Gospel of Mark. Jesus and his disciples are on the road, they’re walking together, and the story says the disciples were were arguing among themselves as they walked and when they arrived at their destination, I could just imagine Jesus kind of stretching his arms out, John.

And so, fellas, what were you arguing about on the road?

They got quiet, kind of sheepishly looked at each other. Guilt stricken since they weren’t talking about how to care for the poor or who might need extra prayer these days. They were talking about themselves and like insecure junior high boys, they were arguing about who was the greatest among them. And I’m guessing they were ashamed to tell the truth about that. Jesus knew what they were talking about and Jesus says. Whoever wants to be great must be least. And then Jesus invites a small child into their midst.

He stretches his arm out. Takes the child into his arms and says, whoever welcomes such a child in my name. Welcomes me, indeed, welcomes God. Now, here’s where we need to be a bit cautious. So often the scene is as depicted in paintings with Jesus welcoming this clean, cute, smiling, well-behaved, adorable child with big blue eyes.

It’s important to remember how children were treated and proceed back in the time of Jesus in the first century. As one writer said, children in the first century were treated more like mongrel dogs. Then beloved members of the family. Children were socially insignificant. Invisible, unimportant. Vulnerable the infant mortality rate in the first century. Was about 30 percent. And then another 30 percent died by the age of nine. So when we pictured Jesus welcoming a child. Embracing a child, those children didn’t exactly take bubble bath every night before being tucked into their Sesame Street bed sheets.

By whether we were able to see all children, all children as our children, imagine if we were if we measured greatness in terms of whether we were able to create a life for our children, our grandchildren and their children free from violence and fear. You know, when we close our eyes. When we close our eyes and we envision Jesus. Picking up a child today, what do we see? Do we see George Floyds, seven year old daughter, or Donte Wright’s one year old son?

Do we see them in the arms of Jesus? Do we see the child who’s going to go go to bed hungry tonight?

Do we see that they are our children? Max Dupree tells the story about his granddaughter, Zoe, a name that literally means life.

Zoe was born premature. Weighing only one pound, seven ounces at birth, literally clinging to life by a thread. Her biological father abandoned her and her mother a month before she was born. She was so tiny, a wedding ring could slide up her arm to her shoulder. The doctor said she had only a five to 10 percent chance of living three days. When Max visited his granddaughter, Zoe, she had had two lives in her neighborhood, one in her foot, a monitor in each side of her chest, a respirator tube and a feeding tube in her mouth.

And that’s what Max did every day, he showed up every day and did what the nurse told him to do. And a miracle happened. Little Zoe not only survived. But begin to thrive. And Max said he knew for the very first time in his life. What he was put on earth to do. To reach out not just to his granddaughter. But to every child. Especially the most vulnerable. And let them know they are loved, so very loved.

And build a world where all children. Had the chance to thrive. And flourish. That is our holy and urgent task. To remember, there’s no such thing as other people’s children. They are all our children to remember that living for ourselves simply leads to getting old. Living for the sake of our children. Their children, their future. Shapes us into becoming elders. The world doesn’t need more successful people focused on their own importance. The world needs more elders.

More healer’s. More people walking in the way and rhythms of Jesus. Which is the way of love. A lot of that recognizes there’s no such thing as other people’s children. They’re all our children. He didn’t know, and as we welcome children. As we welcome children, especially the most vulnerable children, into our hearts. And we build a world where all children can flourish. My guess is we just may find. It is our hearts. That are healed.