Feb 28th, Again and Again: We Are Called to Listen with Rev. Dr. Steven Koski. 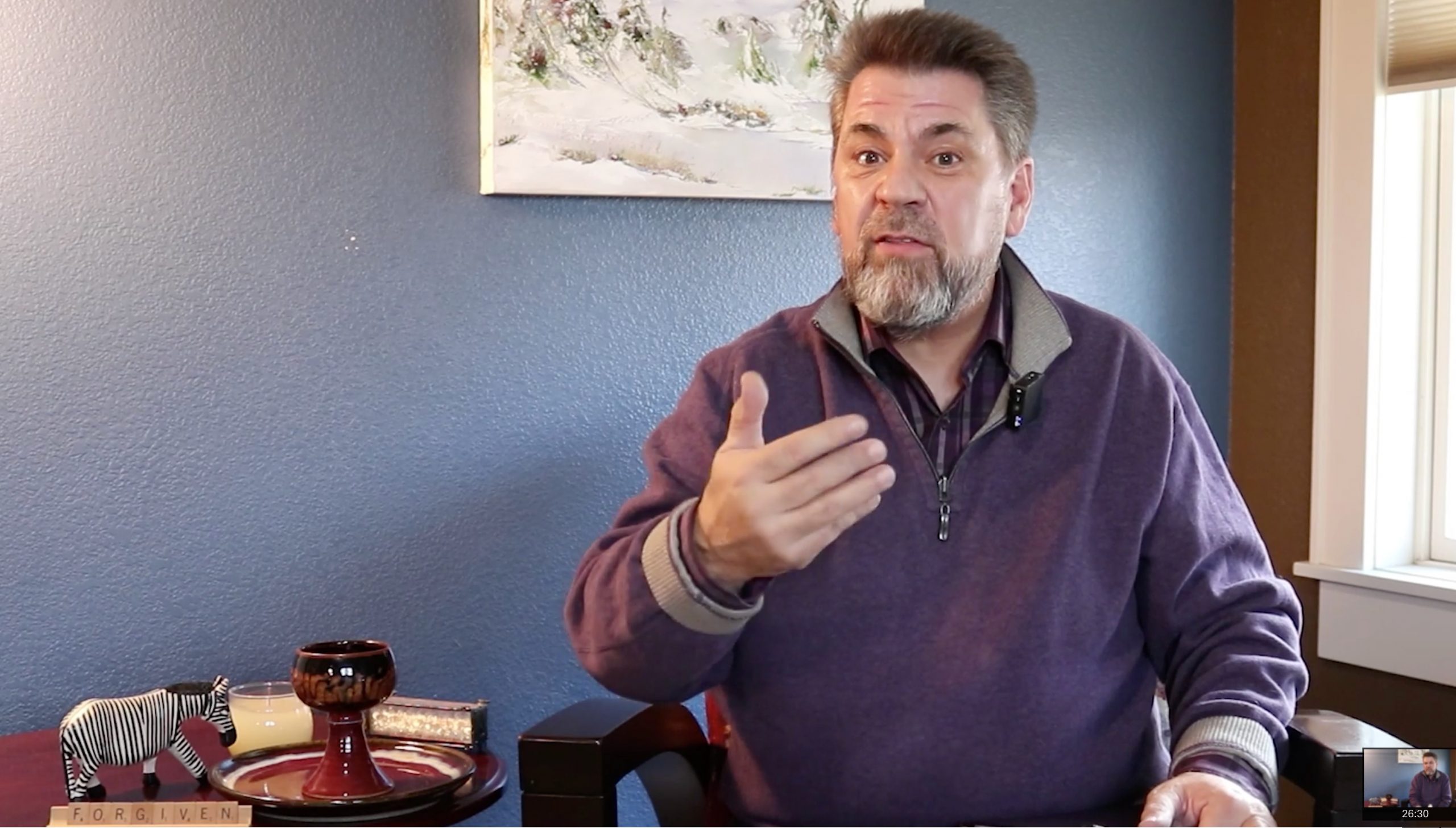 Feb 28th, Again and Again: We Are Called to Listen with Rev. Dr. Steven Koski.

Here I am in my in my study at home. This is the the spot, if you like, my little altar. Where I sit for 20 minutes in the morning and 20 minutes at night, most days. To sit in the presence of God, the presence that is always present to us, to sit with centering prayer.

As I mentioned earlier, Jan Richardson said, let there be an opening into the quiet that sits beneath the chaos. And there, you might see what shimmers in the storm, and you might find the peace you didn’t think possible.

We need to change. We need to change our language. There is no such thing as as going back. There is only going forward. And then, honestly, there are some things about what we used to consider normal, that aren’t sustainable, that are destructive, that are best left behind. So the question isn’t, how will we get back to the way things were? The question is, how will we move forward and build a better future? To build a better version of ourselves, one that is more in line. With what God intends for our lives. Not just our lives, but all of God’s children.

What is needed in going forward is wisdom. We are bombarded and overloaded with information. We’re starving for wisdom. Where do we find wisdom? Well, the psalmist in Psalm 46 would suggest. Be still. Be still and know. And the Hebrew there for know, Rafa, isn’t knowledge, isn’t head knowledge, be still that you might have more information. It actually speaks about an inner knowing. Be still that your heart might know, that your intuition might know, that your soul might know.

We’re in the season of Lent. Lent has truly and fully begun and Lent is a time to pause. It’s a time to reflect. It’s actually a time to restart. To restart the ways that we are present in the world.

I think one of the things that that is most essential to changing the way we are present in the world, to moving forward with wisdom is to learn how to be still. Learn how to be more present to God.

To practice deep listening, actually requires emptying of yourself. It requires surrendering your your assumptions and what you think you know. So that you can truly be present to the other. So it is with listening, listening to God. So it is with being present to God. It means quieting all of our thoughts. Surrendering what we think we already know, our assumptions and our judgments. And to be still, as the psalmist said, and know what we don’t know.

It didn’t work. I just became I just became more anxious. Sometimes trying to approach our anxious thoughts by just thinking more about those thoughts is kind of like changing your stinky shirt when you really need a shower. So I decided to take my anxious thoughts, kicking and screaming, to the cleansing space of stillness. I sat in this chair and just decided to just take a few moments for a breath prayer. A simple breath prayer, breathing in, breathing out. Using the words of the psalmist, be still, as I as I took a breath in, and know, as I took a breath out, be still and know.

I was very familiar with the voice of my anxiety. I wanted to hear a deeper voice, a voice of wisdom. So for five or so minutes, I just said to myself in that breath prayer. Be still and know, be still and know. And after about five minutes, I had this kind of this inner knowing, to call a friend, someone I hadn’t spoken to in months, if not over a year. So initially I dismissed it, you know, silly, but it persisted… this inner knowing, this nudging to call this friend.

So I called him, and he was in a really dark, dark place. He talked a lot, I listened. And then after about an hour or so he said, how did you know? How did you know that I needed you to call just at that moment? And I said, honestly, I didn’t know. But fortunately, God knew.

God was just waiting for me to listen. Thomas Merton said, Silence is God’s first language, everything else is a poor translation. The quieter we can become, the more we hear. The more we hear those things that are. That are most important to hear. One of the best stories, one of the best stories in the Bible is the story of Elijah and it is found in 1 Kings Chapter 19. This particular part of the story, is about the year nine hundred B.C. and King Ahab is the king of Israel and he marries Jezebel.

Well, Elijah, like many of the other prophets, saw his role to call people back to the God of Israel. The one true God. So, Elijah was able to show that the gods that Ahab and Jezebel were proclaiming, the gods of violence and greed, were really false gods. That God, the God of Israel, was God. Well, this infuriated Jezebel, so Jezebel threatened Elijah with his life. Said she was going to kill him.

So Elijah ran for his life. He found himself in a cave at Mount Horeb, the the mountain of God. And Elijah, at this stage, didn’t know what to do… Didn’t know where to go… He was exhausted and didn’t know what was next. Just thinking after the year that we’ve had, that feels like a familiar feeling. Exhausted, not sure what’s going to happen next.

And there’s a small little detail in Chapter 19, a small little detail in the story that I don’t want you to miss… Because Elijah found himself alone and afraid. And, in order to find the wisdom, as we emerge from the crises of this past year… In order to find that important wisdom that will help us to find a way forward, we need to realize in this story, an angel appeared to Elijah and said, eat. Eat or else, the journey ahead will be too much for you.

So in the story, we see that that the voice of wisdom is a voice, if we’re willing to listen, that says, take care of yourself. Eat. Find sustenance for your body, for your soul, or else the journey ahead will be too much for you.

I wonder how good you are at listening to what your soul needs. Asking for help, being willing to receive the help that is offered. Asking for help is not weakness. It’s a desire to be strong. When we practice self care, we’re actually caring for the people whose lives we touch.

So in this story Elijah found himself alone, afraid, exhausted. And the angel says to him, as the angel says to all of us who are exhausted after the crises of this last year, eat. Find sustenance for your body, for your soul, for your mind, or else the journey ahead will be too much for you.

In the next part of the story, we discover that sometimes in order to find the wisdom for new ways, for new ways of being in the world, maybe we have to be open to listening for God, in new ways. Elijah was a prophet. Elijah was trained and experienced as a prophet, listening to God in the normal ways that God was normally heard in his time.

I think of the past year where it’s been almost a year since we’ve worshiped in normal ways. Are we learning and being open to hearing God in new ways?

Well, first, the story says Elijah assumed that he would hear the voice of God in in a great wind, in a mighty wind. Which was understandable because in throughout Hebrew scripture, the power of God was often associated with the wind. I mean, the very word of wind here in Chapter 19, Ruaha, the Hebrew word is the same word for the spirit of God. We find in Genesis one to the spirit that hovered over the chaos at the beginning of creation.

And then most assuredly, the presence of God would be known in fire. That was a very common place where God was experienced. Think of Moses and the burning bush. Think of the pillar of fire that led the Israelites who were wandering through the wilderness. But it says, God was not in the fire.

Someone asked me last week, they said, I’m going to spend time with my mother, who is in the last stages of life, and is about to transition from this life to more life. And she said, can you give me words? I don’t know what to say. I said, say nothing. Words in many ways will be inadequate. Just be there. Just be willing to be there and and trust that the silence itself will speak more eloquently the language of love than ten thousand words. And if you can be there. If you can be still, maybe both you and your mom will know the love that holds you both.

I remember holding my dad. I was able to be with my dad in the last moments of his life, and I remember holding him as he took his last breath. It was just he and I in the room. The sound of sheer silence filled that room. But I can’t explain it, I can’t explain it. Even though my heart was just breaking open with unspeakable grief. I also felt this peace, this sacred presence. I knew I wasn’t alone. Love was there and I didn’t have to be afraid.

They need to be still and listen to the sound of sheer silence. Because Thurman said, if we’re able to be still, we might be able to hear the whispers in the heart speaking courage to our fear. Hope, to our despair. I really believe I’m convinced, that if we could learn to be still, to be present to God in stillness, it will change the way we are present in the world.

Just repeat that rhythm for two minutes, three minutes, five minutes. If you get distracted, just go back to that phrase, go back to your breath. Be present to God in the stillness. For the next few minutes in this visual meditation, let’s try it out, experiment, try it. Be still and know that I am God. Be present to God in the stillness of this next few moments and just see what happens.

St John of the Cross said. Silence is when God’s spirit of peace secretly anoints your soul so that your life might anoint the souls of others with love.