Posted: Sun, Sep 26, 2021
Where Do We Go From Here? with Rev. Morgan Schmidt. My friends. This week we continue our series on I’ve been meaning to ask just these questions that maybe you’ve been meaning to ask. And this morning is, where do we go from here to answer this question? And if you know me that it [...] 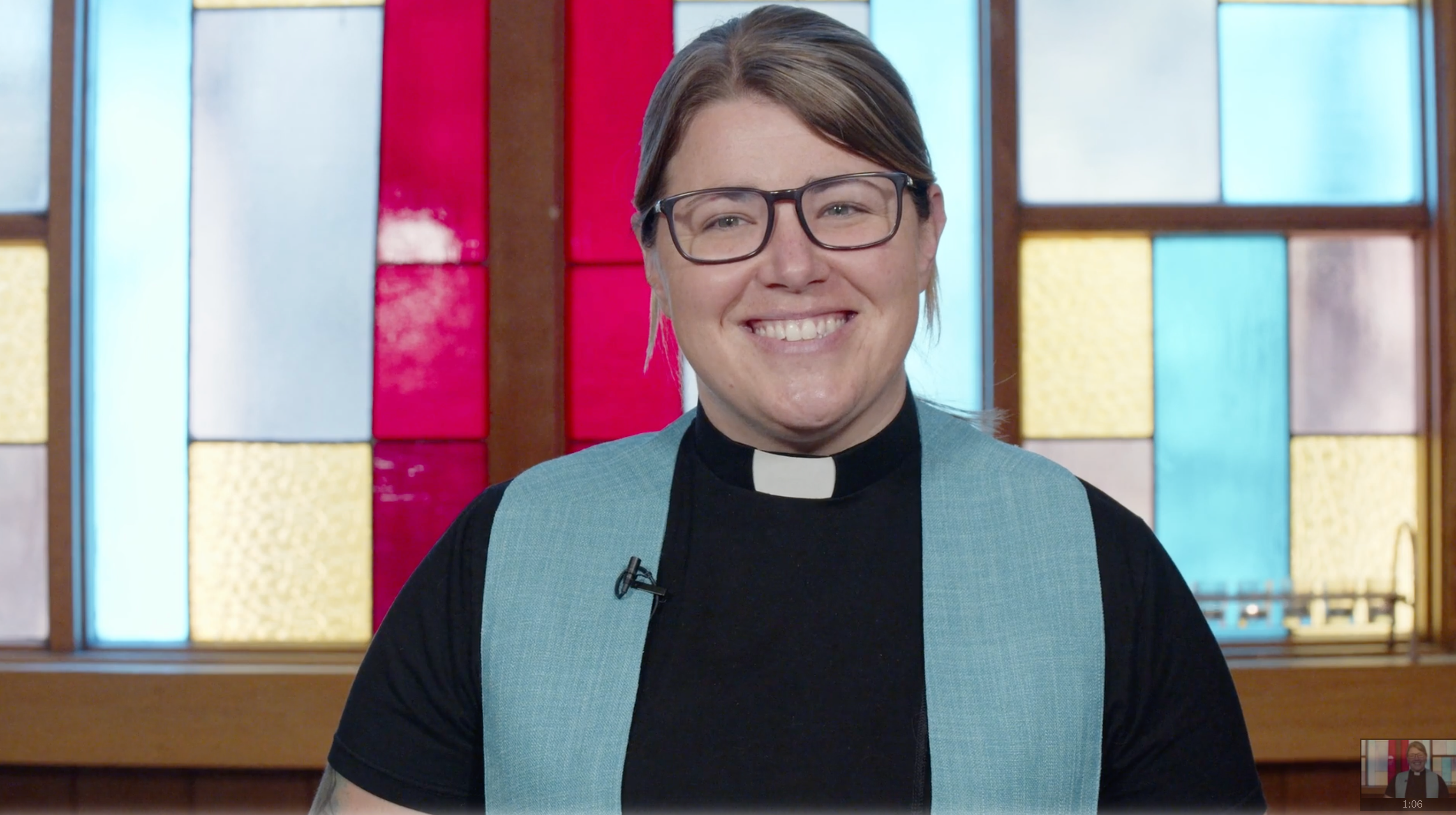 Where Do We Go From Here? with Rev. Morgan Schmidt.

The Book of Ruth opens at the scene of a crisis. There is a famine in the land of Judah that forces a family of four to leave their home town of Bethlehem, a city whose name means Ironically, House of Bread. They hear rumors that there is food in the country of Moab. So Elimelech, Naomi’s husband, makes the difficult decision to move his wife and two sons almost 50 miles away to the other side of the Dead Sea. Moab and Israel were enemies, so you can imagine how desperate they must have been to seek refuge in unknown and hostile place.

Somehow, though, the author of Rust tells us they settled and made a home in his foreign land, Elimelech died, leaving behind Naomi with her two sons. They eventually marry women from Moab, RPA and Ruth. Ten years later, though we read that both of Naomi son passed away as well. Suddenly, three women are living alone and in such a patriarchal society, this would have left them vulnerable and destitute. With a rush of hope, Naomi hears that the famine in Judah has come to an end.

She heads back, and Ruth and ARPA follow her. And there comes this moment when Naomi stops. Why are you coming with me? You would be foreigners in Bethlehem. You would have no rights.

Go back to your families in Moab and find some new husbands and get on with your lives. They weep together. Arpa takes Naomi’s advice to heart and returns to her family for reasons unknown, Ruth says no. She refuses to turn back. Her words to Naomi are infamous.

Do not press me to leave you or to turn back from following you. Where you go, I will go where you stay. I will stay. Your people will be my people and your God will be my God. Where you die, I will die.

I’ll be buried right alongside you. And then Ruth binds herself with an oath calling upon God to curse her if she ever abandons or betrays Naomi. What can you say in the face of that kind of love? That kind of bond. Naomi takes her commitment to heart and stop insisting that Ruth go back to her homeland.

This was a very risky move in the ancient Near East. At this time, a widow with no larger clan or tribe that she’s associated with for protection is extraordinarily vulnerable. This is a cinematic moment, a classic turn of a hero’s journey. The storyteller doesn’t tell us why Ruth would put herself in this precarious position. In fact, we have to keep breathing to get a glimpse into her motivation.

And we get that from a wealthy landowner she meets when she arrives in Bethlehem. There is much more to this story. I know, but I want to invite us to Zoom in to this scene. Ruth goes out to glean from the fields. It was law at that time that remnants of the harvest be left in the fields for the poor to harvest and survive on.

She ends up in boats fields. And Boaz says to her, I’ve been told all that you’ve done for your mother in law since the death of your husband and how you left your father and mother and your homeland and came to live with the people you didn’t know before. May the Lord reward you and give you refuge for the kindness you have shown. Boas recognizes this story as familiar. He comes from a tradition where Abraham heads into the unknown.

And this happens in every hero’s journey, like ever in every flavor of literature, ever over centuries. It’s as if when Boaz says, I’ve heard about you, you left the known and headed into the unknown. It’s almost like he says, I recognize the hero in you. I know this story. He affirms something in Ruth recognizes something extraordinary in her at the beginning of the story, our question is, what is it about Ruth that causes her to go completely against this conventional wisdom?

What even makes her consider asking the question, Where do we go from here? Her own sister in law goes back home. Arpa takes the safe and known path. And who can blame her? Why would she go to a foreign land with foreign customs to be a poor immigrant refugee when she can go back to her parents, find a new husband.

But something in Ruth says, no, I’m heading the other way and be as season her something of this resilience, this resolve, this intuitive trust that there is something more for her. What were those moments when you knew in your own life? This isn’t it. I’ve got to go. It’s time for something new.

I just had a moment like this with a friend named Jake. He is one of my favorite humans on the face of the planet and and also a really great dancer that I danced with on many occasions. And he recently moved. We had a going away party for him. We danced a little bit, and to me, I couldn’t fathom from my perspective.

Why do you have to go? Why would you leave all these people? You love this peace that you love. And it became clear in our conversations that he had to go that he felt there was more for him somewhere else, that he was finding hope in a destination further away. We wonder in these moments when we’ve had kind of this gut instinct that there’s something next.

The storytellers in scripture leave out the explanations for these journeys into the unknown as well. We don’t know why Abraham leaves, except for a mysterious voice from God that tells him to go. We don’t understand any of these deeper motivations of the heroes stories that we know so well. Oftentimes the writers a scripture just don’t talk about it. And I think maybe they don’t talk about it because there is something in the story that is universal.

We don’t know why, but something within us says, Keep going, keep going, don’t apologize, don’t defend. Don’t explain because you the true you is in this journey with Ruth. Boaz has heard of her because of this. He says to her, you are not only extremely kind to your mother in law, but you left. You took a risk for the sake of love.

The word that comes to define the whole story of Ruth is the Hebrew word has said. It’s often translated as kindness, but that’s a little anemic. It falls a little flat to only call it kindness. Sometimes it is translated as loving kindness. Head has a back and fourth dimension.

It’s like we’re talking about a mutual dialogue of love, a relationship of love. And actually, God’s love is described this way many times in scriptures that it’s not a one way street, but that love, in this sense is a dance that calls for a partner. Another author defines Hesed as a long acting love, an unfailing love. So where do we go from here? There’s not one single path you have to figure out.

It’s not like there is some secret you have to seek or a Riddle you must answer. There are a thousand ways to go that follow in the way of love, and maybe it’s not an actual leaving. Maybe it’s not a huge transition. Maybe it is simply being open to what God has for you today. Where do you go from here today?

It’s not about logistics. It’s about why we go. What is that thing that is within us that compels us to move that compels us to action on behalf of our neighbors? We go because of Has said we go because we have a vision for how we can partner with God and the restoration of all things. And that can be on the daily.

It doesn’t have to be some huge life changing shift, though sometimes it is. And I want to remind us that it’s not. Where do I go from here? It’s never a solitary journey. The journey happens in community, happens with people, happens in the midst of this give and take.

Has said, love, this kindness that is unfailing, this deep, fierce, loving kindness. And so I wonder with you, first Presbyterian, where do we go from, Harry? Collectively as a community, what is next for this Church? We have for a hundred years been working in this community on behalf of the marginalized and those who need love the most. I want to wander with you and dream with you and have a front row seat to how you re imagine yourselves when we finally gather together in person again.

What is this new world, this new reality calling us to what is the work of love? The work of Has said that is ours as a community to do. And I trust that there is not a formula for this. There is not an easy answer. And I’m so sorry.

I wish that I could say, Do A and A will need to B and B led to C, and then you’ll have it all figured out and you’ll know exactly where to go and why and how I take hope from some words down in the book of Isaiah, where God is saying to God’s, people, I am with you and I will not leave you. And I will wipe every tier from your eye and all will be made well. And whether you turn to the left or to the right, you will hear a voice behind you saying, this is the way walk in it.

So it’s not. Where do we go from here?

But why do we go from here? It’s about tuning into our own sense of head and connecting ourselves to the head of God, which is unfailing. We go from here because we are people formed in a way of love formed by love, formed to love, and we make our world a more whole place when we do so, friends, whether you turn to the right or to the left, may you hear a voice behind you saying, this is the way walking.