Posted: Sun, Nov 1, 2020
In the first century, there was a great pandemic that that took place throughout the whole Roman Empire. It actually lasted from 165 A.D. to 180 A.D. It was a time when Roman citizens were fleeing, leaving their infected family members, including children, behind to die alone. It was the earliest followers of Jesus who stayed caring for the sick, caring for the dying, feeding the hungry. A first century historian described this fledgling Christian community this way: "See how they Love." Will the same be said of us? 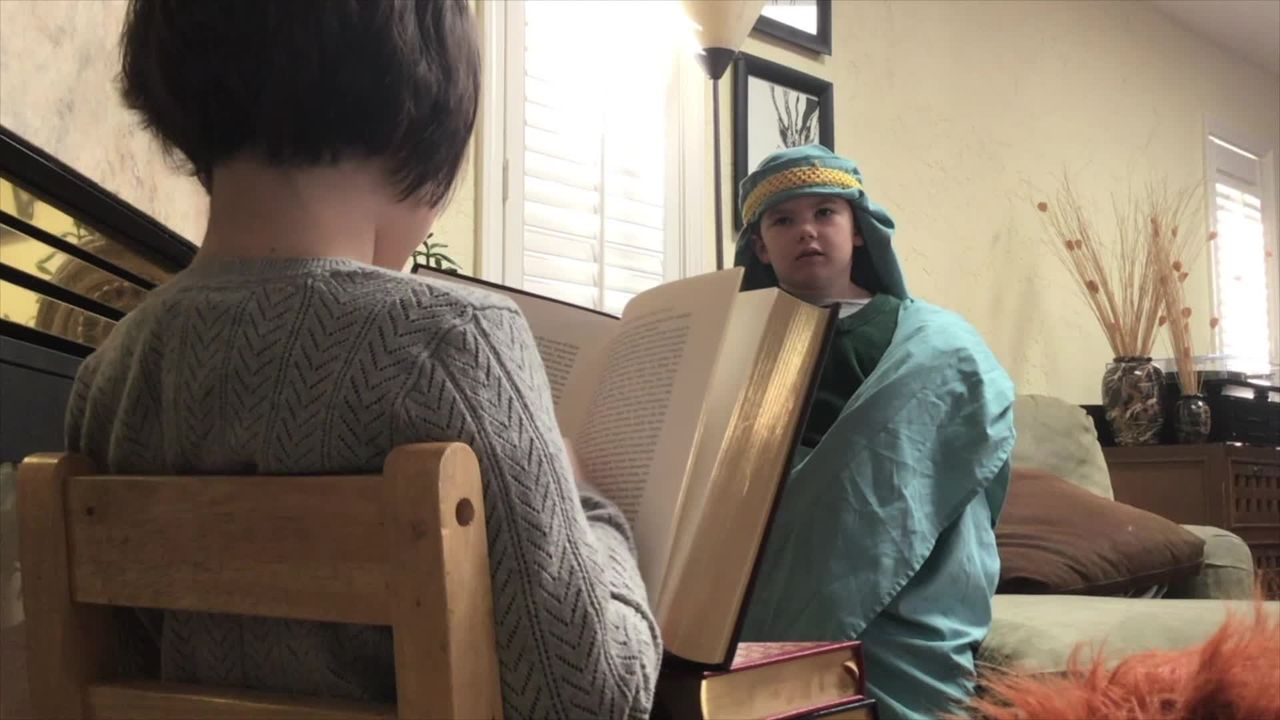 They light the first candle in honor of their ancestors grateful for those who have gone before them making it possible for them to enjoy the life they live today. For us, it’s All Saints Day, a day where we remember and honor the Saints. First Presbyterian has one hundred and fifteen year rich history of courageous, faithful, loving saints.

Now imagine that if every government gathering, if every business, every school, every church, every every home would have this ritual, a candle with three wicks. Before they meet, they would give thanks and honor the Saints, their ancestors, they would recognize that this day, this moment, this breath, is sheer gift, taking nothing for granted. And they would vow to make decisions that not just simply serve themselves but serve their children’s children.

We’re beginning a new sermon series in November we’re calling “See How They Love”. This is the season of the church that we call stewardship. Some people think stewardship is simply about raising enough money for the church’s budget. And if that’s what stewardship was really about I think I’d suggest starting bingo on Friday nights or raffling a Chevy Tahoe. I think that would be an easier way to raise money.

No, stewardship is a time set aside to reflect on our relationship with God and our relationship with the gift of life that we’re given. A steward is someone entrusted with a gift. Stewardship is this time where we we take a little bit of time to think about: are we honoring the gift that has been handed to us from our ancestors, from the Saints. Are we living in such a way that that honors the gift of this day, this moment?

And are we gifting our children’s children and their children a world in which they might flourish. You know, stewardship is a time where we not only challenge ourselves, but we we challenge one another: Are we living in fear?

Or, are we living like boldly and generously? Such a challenging time, there are dizzying and exhausting challenges we face every day. Are we retreating in fear focused on our own self-preservation? Or, are we stepping forward in faith, boldly, generously bringing the love of Christ to Central Oregon and the world? So this November, we have a new theme called “See How They Love”.

In the first century, there was a great pandemic that that took place throughout the whole Roman Empire. It actually lasted from 165 A.D. to 180 A.D. It was a time when Roman citizens were fleeing, leaving their infected family members, including children, behind to die alone.

It was the earliest followers of Jesus who stayed caring for the sick, caring for the dying, feeding the hungry, taking in the children as their own, often at the risk of their own lives. Roman citizens were amazed because they had never witnessed such selfless and sacrificial love.

There’s actually evidence that a first century historian described this fledgling Christian community this way: “See how they Love.” Will the same be said of us? In how we respond to the immense challenges of our day? Will we respond like this? Or will we be like those earliest followers of Jesus and respond like this?

A lawyer went up to Jesus and asked him a question. found in the Gospel of Luke, “What must I do to inherit eternal life?” Now for Jews in this time, eternal life was not about about what’s going to happen to me after I die. They were thinking about life now, today. This lawyer was actually asking a question we all ask in one way or another: How might I live my life with greater meaning and and purpose? How might I live my life in a way that being here matters?

And Jesus says, well, what does the law say?

And the lawyer knowing the law says, love the Lord, your God with all your heart, mind, soul and strength and love your neighbor as yourself. And Jesus said, you’re right. Do that and live. And the lawyer asks, who is my neighbor? A question we continue to ask. Who is my neighbor? Now, the larger context for this story is the people who are struggling to understand the extent of their neighborliness, how far does that go?

Well, honestly, what do we mean by together? Who is included in our togetherness? Who’s left out? Who’s left behind? So Jesus, being Jesus, rather than giving an answer, tells a story.

A man was attacked by bandits, was beaten, was stripped of everything, was robbed. And left by the side of the road. For dead. Now, the robbers in the story had a very, very rigid idea of togetherness.

Their motto was, what’s yours is mine, and I’m going to take it. Because I need it and I don’t really care about you. Now before we dismiss the robbers as inconsequential to the story just getting the story going, let’s ask, are there ways that we make decisions to benefit ourselves that, knowingly or unknowingly, leave people by the side of the road struggling?

We live in a world of abundance, yet millions of children go to bed hungry every single night.

When we think about the decisions, the sacrifices that are necessary to fight the crisis of climate change, are we robbing our children’s children and their children of a world where there’s clean air and clean water leaving them gasping for air?

And then Jesus says, two religious leaders passed by the man on the side of the road. A priest and a Levite. And these religious leaders also had somewhat rigid kind of boundaries to their idea of of togetherness and their walls were pretty high.

So these religious leaders say we’d love to help but, you know, we have to get to the temple to take care of our own. So they pass by on the other side, keeping their boundaries of togetherness intact.

And then Jesus says a Samaritan passes by.

Now for the listeners of Jesus, there would have been a gasp. There’s no such thing for the people around Jesus of a Good Samaritan, the Samaritans were the despised “other” for the Jews.

So for the listeners of Jesus, they would have been shocked that he would have even included a Samaritan in the story.

Maybe it’s like Jesus was telling a story in the middle of the Democratic convention and a Trump supporter passes by. You know, that kind of gasp.

But Jesus says the Samaritan is moved with compassion. And this emotion sets him in motion. He sees the man muddy and bloody. But rather than retreat, he moves closer. For the Samaritan, his his circle of love includes the pain of a stranger and includes the pain of an enemy. And Jesus says that he bandaged his wounds. He says that he used oil and wine as an antiseptic.

Again, the listeners at the time would have been absolutely shocked because oil and wine were used in the temple. So the listeners to Jesus would have known that he’s suggesting that the Samaritan is using oil and wine in a way that is more pleasing to the heart of God than the priest and the Levite. And then Jesus says the Samaritan helped the man up on his own donkey and took him to an inn.

And he collaborated with the innkeeper to make sure there were enough resources so that the man could be taken care of and could be healed. And the Samaritan invested his own money. He pledged to come back and pay for whatever it took to to take care of him. So rather than calculating the cost, the Samaritan was committed to this man’s well-being, committed to his healing.

So the circle of love for the Samaritan, his idea of togetherness included the healing and the well being of his enemy, of a complete stranger.

Towards the end of his life, Bill developed dementia. And there were two men in the church, Jim and Carl, and they’ve been in a covenantal relationship for years and they are now married that it is now legal.

Bill, who sang in the choir, never missed a Sunday. Like the Samaritan, Jim and Carl saw Bill struggling and fading into his dementia and they were moved with compassion. They they made it their mission to pick Bill up every single Sunday morning and bring him to church.

They sat on either side of Bill to hold the hymnbook so that Bill could sing his favorite hymns because they knew how important it was for him to sing.

And when church was over, they would take him back home and make him lunch. They’d sit down and eat with him and they’d make sure that he had the care that he needed for the week ahead.

So Bill received the most tender mercy and love at a time in his life where he needed it the most from the very ones he hated and condemned.

You know, in this time of deep and dangerous division in our country, we wonder are those divisions ever going to be healed?

We need to love with the same outrageous love of Jesus, the kind of love that bursts through the boundaries of our circles of love, the kind of love that extends our ideas of togetherness as wide as the embrace of God. In this time of pandemic, in these deeply challenging days, there are so many who are beaten up. There are so many right now who are left by the side of the road struggling.

Will we pass by? Retreat saying “what is ours is ours, and we’re afraid and we need to protect it”.

Or will we be like the Samaritan saying “what is mine is God’s and I’m going to give it away because we are all we are all in this together”. Leaving people to say, wow, wow, “See how they love?”