Posted: Sun, Feb 27, 2022
Feb 27th: Deliver Us – Surrender, with Rev. Dr. Steven Koski. I love this picture. Jennifer, a nurse in New York, learned that one of her patients, John, who was homeless, was forced to give up his dog, Boomer, to the local shelter when he was hospitalized. Jennifer went to the animal shelter and adopted [...] 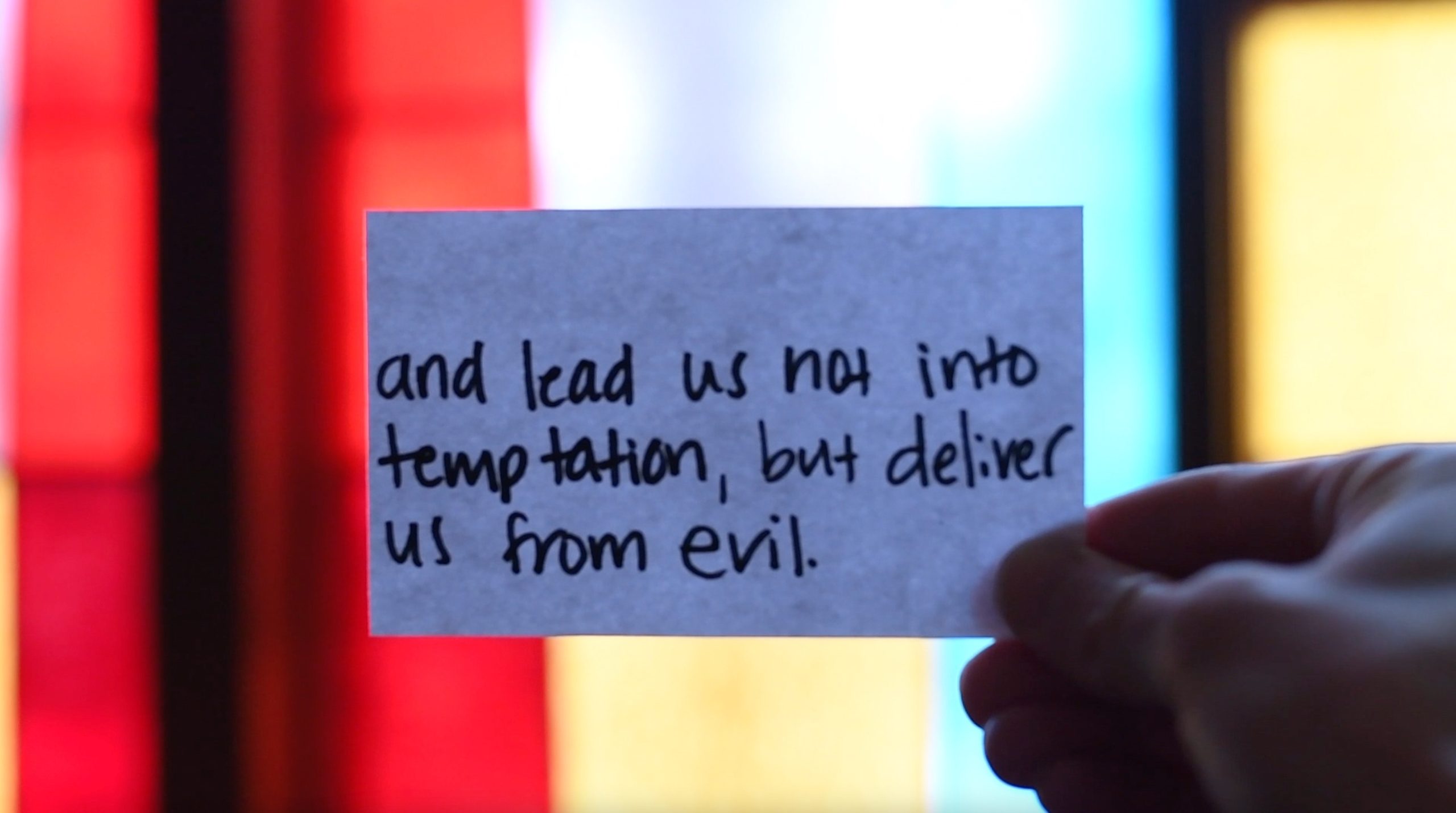 I love this picture. Jennifer, a nurse in New York, learned that one of her patients, John, who was homeless, was forced to give up his dog, Boomer, to the local shelter when he was hospitalized. Jennifer went to the animal shelter and adopted her patient’s, Dog, so that she could bring him to visit while John completed his rehabilitation in the hospital. Jennifer said, There are just so many worries in the world right now. If I can take one worry away from John, that’s the least I can do.

I can’t cure diseases. I’m not a miracle worker, but I can care for John’s dog as long as he needs me to.

The medicine this world needs is to believe in the power of goodness. The Apostle Paul said, do not be overcome by evil, but overcome evil with goodness. I mean, this is our marching orders as people of faith to be a force for good in the world. We conclude our worship series today on the prayer Jesus taught the Lord’s Prayer. We’ve emphasized all along that this prayer is not simply a prayer we recite on Sunday mornings.

Jesus was teaching an orientation of the heart, a way of being in the world. Jesus was inviting this prayer to live in us, that we might live. This prayer and today’s phrase, lead us not into temptation, but deliver us from evil.

Every day we’re attempted to allow fear and the suffering and ugliness and evil in this world to overwhelm us. Jesus says, Pray this way, lead us not into temptation, but deliver us from evil.

One way. One way we are delivered from evil is remembering there is a goodness stronger than evil. Three days after the assassination of President John F. Kennedy, composer and conductor, and actually one of his best friends, Leonard Cohen, spoke these words at his Memorial service.

This will be our reply to the evil of our times, to make music more intensely, more beautifully, more devotedly than ever before.

Imagine if we didn’t understand this prayer, deliver us from evil as asking to be rescued or to escape the pain and suffering in our world. What if we understood this prayer as asking for the strength to resist the temptation, to be overcome by evil, to trust there’s a goodness stronger than evil? Imagine if we collectively said, this will be our response, our reply to the evil of our times to be a force for good. More intensely, more beautifully, more devotedly than ever before.

I was at the stoplight on 27th by the Safeway. It’s actually a really dangerous intersection with lots and lots of traffic. An elderly gentleman. He was kind of hunched over like Atlas, carrying the weight of the world out his shoulders, trying to get across the street.

You could barely slip a piece of paper under his shoe as he was shuffling forward inch by inch. He was only about half way when the light turned green. I mean, I could hear a couple horns behind me, honking irritation and impatience.

There is a teenager, a young woman with electric purple hair that somehow magically was standing on end, making her about a foot taller than she was, and she was skateboarding on the sidewalk. She left her skateboard behind and she raced to this elderly man, offering to help him cross the street. It was beautiful. She tenderly took his arm and I watched as she whispered something in his Earth, and they both laughed.

I couldn’t help but think that’s what the Kingdom of God looks like. Mercy, tenderness, goodness.

Could these be our true superpowers in a world threatened every day by villains at a time when there’s so much cruelty, so much inhumanity and ugliness and evil?

Do not be overcome by evil. Overcome evil with goodness. In Galatians Five, the Apostle Paul also says, the fruits of the Spirit are kindness, goodness, gentleness.

In other words, there is something of God in every act of goodness.

As a pastor, I’ve had many conversations with people who just really aren’t sure what they believe and particularly struggling to believe in the resurrection. Rather than trying to convince with scripture or a theological argument, I often tell a story, a story that took place as South Africa struggled to heal from the pain and suffering that the evils of apartheid cost. As part of the Truth and Reconciliation Commission, the perpetrators of evil acknowledged their crimes and met face to face with their victims. One white police officer faced in the courtroom faced the black woman whose husband he and other white officers murdered by setting him on fire in the peace of that unspeakable evil. This woman requested three things.

She said she wanted to be taken to where her husband was murdered so she could gather up the dirt and the ashes and give her husband a proper burial.

She asked that the police officer visit her once a week in the ghetto because she still had a lot of love to give, and this officer needs someone who will love him. And the third thing she asked is for that police officer to be brought to her in the courtroom so that she could embrace him, so that he would know her forgiveness and experience the same Grace that God has given her.

Why do I believe in the resurrection?

But with God, all things are possible.

At the very heart of our faith is this core belief that suffering, evil, even death, will never have the last word. God does. And God’s Word revealed to us in the life, death, and resurrection of Jesus is a goodness stronger than evil. The spirit of that goodness was embodied in Jesus. And even though they tried to defeat it, they tried to seal it in a tomb.

It could not be defeated.

And that same spirit of goodness was present in that woman in South Africa.

And that same spirit of goodness is present in you and me.

We are delivered from evil each and every time we bring something of that goodness into the world.

A Presbyterian colleague of mine described a time when he was feeling hopeless about his work and hopeless about the world, hopeless about his own ability to affect change, to make a difference. I get that. It’s so easy to feel that sense of hopelessness. He was overcome by all that was wrong with the world. Tempted to give into despair.

Here’s how he tells the story. I was working with the senior high youth group in my Church, fixing up an inner city park that had fallen into disrepair. We spent the whole weekend. The whole weekend picking up trash, weeding, hacking down bushes, pulling up dead trees. It was hard work.

Two weekends in a row, we left that park as clean as we could make it, and each time the following Monday, there was even more trash and someone pulled down the damaged fence that we spent hours repairing. The park looked awful. We felt hopeless, defeated, demoralized. We were tempted to just give up.

What was I to do?

I did the only thing I could think to do. I planted flowers. No, I don’t know much about flowers. I didn’t know if I was buying the right kind for our climate or if they needed a lot of water or if they needed sunlight. I didn’t even bother to find out what kind of flowers they were.

They were pretty, and they looked hardy enough to stand up to the rowdy neighborhood kids. I didn’t have time to research the perfect flowers for that region or that time of year.

I just know that I needed to plant something, so I planted flowers. I wanted to be the kind of person who would rather try to make even a small, temporary gesture of goodness and beauty than someone who adds to the ugliness or someone who does nothing at all.

The ugliness in that park… Broken little broken liquor bottles, syringes broken toys, Bullet casings, drug deals in the alley, the white person driving by in their fancy car that quickly rolls up their window and locks their door.

All of that ugliness in the Park Reflected the ugliness and pain in the world around us.

So I planted flowers. The youth and my youth group said people are going to just trample on these flowers, right? And just pull them up.

I said, probably we’ll see the flowers have lasted a week. I’m hopeful. Planting these flowers Felt like an act of insurgency, A form of resistance. Planting flowers Goes against a culture of Earth and violence, you know, it pushes back against the corrosive effects of much of everyday life.

It reminds us that in spite of the ugliness, There is beauty, and we are part of that beauty.

Do not be overcome by evil.

Overcome evil with goodness. We planted flowers. Despite their skepticism and reluctance, the students joined in. They said they felt really good about having their hands in the dirt. They commented that the park looked better, even if just a little bit.

They said they felt hopeful. They’re now eager, they’re eager to plant more things. So I’m thinking maybe we’ll do herbs or a little garden. We become accidental co-conspirators with God in continuing acts of creation we planted flowers a conspiracy of goodness and beauty in the midst of a world that can be pretty ugly. Friends, what if we trusted that with every act of goodness we bring something of God into the world and deliver one another from evil?

You know, sometimes I think the faith that goodness Is stronger than evil Is the foolish dream of poets and artists or delusional like Don Quixote’s swinging at windmills. But then, I ask myself what other faith will change the world? Heal the world?

Maybe what the world needs Is the kind of foolishness that plants flowers in the midst of despair and says we will respond to the evil of our days by arming ourselves with mercy and goodness. Joining together in being a force for good. More intensely, more beautifully, more devotedly, than ever before.